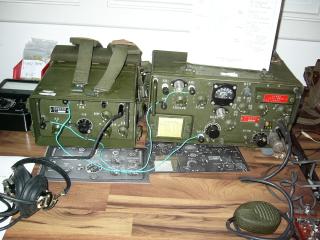 I bought this Chinese HF transmitter/receiver set from seller redstarradio on eBay back around March, 2005. It came as a complete new set including the manuals, spares, tools, test equipment, etc. that would normally be issued with the set, all in original packaging. It was a lot of fun to unpack a brand new complete radio set in pristine condition! The historian in me felt bad about destroying the original packaging, but I just had to play with the radio! I compromised by carefully photographing everything as I unpacked it, paying special attention to packaging methods and markings.

The receiver operates from a battery which provides 90V for the tube plates and 1.5V for the filaments. It’s not too hard to fabricate a replacement battery pack from 10 each 9V batteries and a D cell. There is also a provision for external power, and the set includes a cable which plugs into the receiver and has bare, tinned, labelled wires at the other end for connection to an external power sourceq. The transmitter is powered by a hand-crank generator. According to the manual, it appears that various dynamotor supplies were used in place of the hand-crank generator in vehicular installations.

I asked one of my Chinese-speaking co-workers to translate the front panel markings for me. Here are a pair of modified pictures of my radio set, showing the control, connector and indicator functions in English:

Both units actually have the same color of paint… I’m just not a great photographer! Though I don’t have a literal translation at this time, I’ve been told that the red plate on the transmitter’s crystal cover contains inspirational instructions from Chairman Mao, telling the operator to go kick some capitalist ass. I think that the red plates on the removable front panel covers are similar.