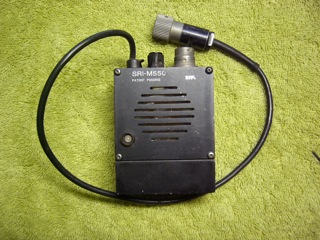 I bought this amplified communications speaker at a military surplus swap meet. It’s a nice little powered speaker which is intended for use with manpack radio sets (particularly ones with digital data capabilities). It is powered by a 9V battery which fits in a sealed compartment at the bottom of the unit. It is housed in a rugged aluminum chassis, and has a pair of clips on the back which can be used to hang the speaker from one of the “roll bar” handles which are common on these manpack sets.

The top of the speaker includes an audio accessory jack to which a handset may be connected, an on-off-volume knob, a toggle switch which selects analog or digital modes, and a tiny 6-pin auxiliary conenctor made by Hirose. The front of the unit has a speaker grille and a red/green LED. The LED appears to light up green when audio is over some threshold (i.e., functioning as a call light), and red when an attached handset’s PTT switch is pressed. White noise will light up the LED, so the radio’s built-in squelch function is still necessary to make the call light meaningful.

I haven’t obtained any original documentation covering this speaker yet, but I’ve received the following information from somebody familiar with the device (who wishes to remain anonymous):

The AUX port is intended to connect a data device such as a DMDG, fax, etc.. Flipping the ANA-DIG switch would connect that data transfer device to the green radio (or crypto) and disable handset operation. The center pin (F) on the pigtail is used to put the radio/crypto into digital data mode so it would work with the connected data device. The box can be used with any radio having the standard 5/6 pin handset connector for audio functions. The data device interface would only work on radios designed to accept the data.

You can also hook an analog data device to the AUX port (i.e. fax) and just leave the switch in ANLG. You can then alternately use the handset or data device.

It was designed in the early 1990s. While the product sold maybe a few hundred to the Military (mostly Special Operation Forces), it never really took off. One of its problems was that little mylar speaker could be easily overdriven if the radio user cranked the radio’s volume knob (one on the radio itself) too high. So, people thought the sound from this box was not good enough. A mylar speaker was purposely chosen due to its ruggedness, but that was partly its downfall.

One of these days, if I ever get around to it, I’d like to trace out the wiring of the AUX connector and identify its mating connector. If you have any more information to share about this speaker such as a manual, schematic, recollections of using it in military service, etc., please comment.

Here are some more pictures of the unit. Click on the thumbnail images to enlarge them. Note that I added the bar code label on the inside of the battery door; it didn’t come with the speaker.