It’s about time that I wrote a quick blog post about the 6m fox hunt transmitter that I made for Military Radio Collectors Group events. I made it out of an AN/PRT-4A transmitter. From the outside, it looks unmodified. But on the inside it has a few changes! 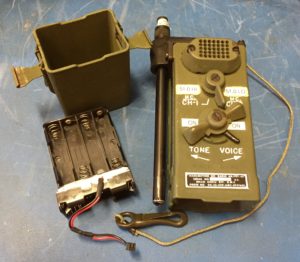 I started with a refurbished AN/PRT-4A transmitter, which I purchased from C&H Surplus a few years ago. I don’t know if they have more left.

I designed a small board which mounts on the bottom of the main housing in place of the original battery connector. This board includes a microcontroller with enough flash memory to store a short audio message. There’s no built-in message recording capability; it’s necessary to use arcane magic to include the message in the firmware image for the microcontroller. 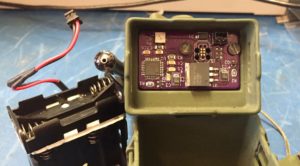 I also built a new 15V battery pack based on two 4-cell AAA holders and one 2-cell AAA holder. It was tricky to find holders which just barely squeeze into the original battery box. I used these parts: 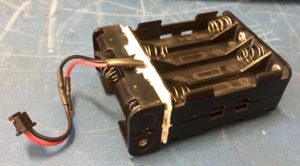 Modifications to the radio included:

I have shared all of the PCB design files and microcontroller firmware on GitLab: