My new Kubota L3301HST tractor’s loader valve developed a couple of minor (and as it turns out, related) issues. The fix was very easy.

My tractor is still quite young, with just 19 hours on the runtime meter. The loader valve developed two issues:

I’d hate to trailer the tractor 50 miles to the dealer for what seemed likely to be a simple issue, so I decided to take a look at the valve assembly myself. The first task was to figure out how to get the plastic cover off the top of the valve assembly. It was not clear which bolts might secure the cover and which mount the valve body and joystick mechanism, so I started carefully loosening bolts to see which ones seemed to be holding to cover down. I quickly found that three of the bolts with 10mm heads hold the cover in place. 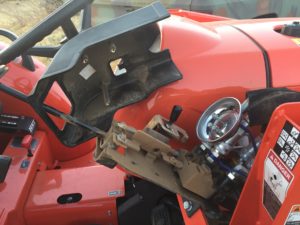 With the cover off, I could see the two linkages that connect the joystick handle to the valve body. One of them was rotated out of proper position, and that caused both of the issues. The locking pin on the lockout assembly no longer lined up with the hole in the rotated linkage, and the edge of the linkage bumped against the lockout assembly bracket so that the valve could not be pushed fully into the detented float position. 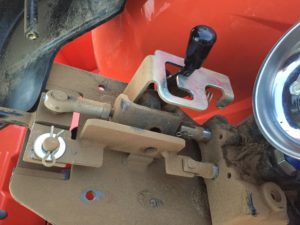 The fix was a simple matter of turning the linkage back to the right orientation. 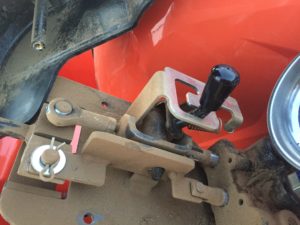 There’s nothing to stop the linkage from turning out of proper orientation again. I could probably make a modification to keep the linkage properly aligned, but I don’t think it’s worth the effort. Now that I know what the linkages look like, I can just rotate that sneaky linkage back into place through the lockout lever’s opening, without needing to remove the plastic cover.