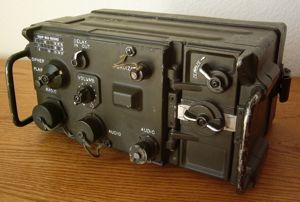 The KY-38 is the manpack variant of the NESTOR family of voice security devices. Used during the Vietnam War, this family included the KY-8 vehicular unit, the KY-28 aircraft unit, and the KY-38 manpack unit. These devices permitted secure voice communications over radio.

This particular unit has been demilitarized; that is, all of the cryptographic hardware has been removed from the unit before it was released as surplus, leaving only the case, power supply, interface circuitry, and an interesting electromechanical keying device. The battery box is also missing.

The cryptographic key is entered with a KYK-38 keyfill device (which I do not have). Opening the small door on the front panel of the KY-38 reveals a collection of holes. Two large holes allow long pins on the KYK-38 keyfill device to set the spring-loaded mechanical zeroizing mechanism inside the KY-38, and 64 smaller holes allow the keying switches to be set by corresponding pins on the KYK-38. Behind each of the small holes is a multi-position slide switch which can be set to any of a number of positions by inserting a metal pin into its hole to the correct depth. The switches are all reset to their initial positions (closest to the front panel) by the mechanical zeroizing mechanism.

The zeroizing mechanism’s powerful springs are cocked while entering the desired key, and the mechanism is then armed once the front panel door is closed. The springs are released when the door is opened, the manual zeroize knob is turned, or an electrical zeroize signal is applied through a connector on the front panel. Once released, the springs return all of the keying switches to their initial positions, thus erasing the entered cryptographic key.

While the actual cryptographic hardware has been removed from this unit, the electromechanical keying unit is still present and operational.

Here are lots of pictures of my demilitarized KY-38. Click on the thumbnail pictures to see (much!) larger versions. 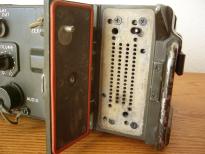 Here is the rear of the unit (minus the missing battery box), and the unit removed from the outer case.

After loosening some captive screws, the unit can be hinged open to access the circuit cards. It’s designed such that it would be quite difficult to hinge it open like this without tripping the zeroizing mechanism. Note that a few circuit cards are missing. They were most likely removed in order to demilitarize the unit. I’m sure happy that just the cryptographic cards were removed rather than destroying the whole unit! 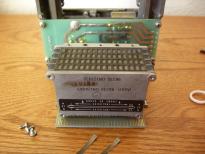 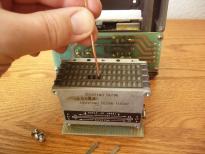 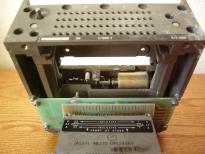 These movies show the operation of the zeroizing mechanism and the keying switch assembly. They are each provided in both Quicktime (*.mov) and Windows (*.wmv) formats.