The BC-1335 is an FM transceiver used in late World War 2, covering 27.0 through 38.9 MHz in 120 crystal-controlled steps. It is an improved successor to the similar BC-659 radio. The transceiver operates from either 6VDC or 12VDC, supplied from an external source such as a battery pack.

I purchased this set from another collector in August, 2009. My set included a DY-44 dynamotor, which allows the set to be powered fomr a 24VDC source. I’ve traded the J-72/GR terminal box (shown below) for a CH-291 battery box (not yet shown here). Rather than using original BB-54 wet cells, I installed six 6V gel cells (in parallel) in the box.

The set can use either an antenna whip which attaches to a swivel mount on the back of the transceiver, or a remote whip antenna. I have the J-72/GR matching unit which allows this radio to be used with an AB-15 antenna mast base, but I hope to get my hands on the correct built-in whip.

The SCR-619 set could be vehicle-mounted or carried on a special pack frame. In vehicular installations, the set would include Battery Charger PE-219, two each Battery Box CH-291, Mounting FT-506, and Terminal Box J-72/GR.

I hope to obtain the necessary accessories for a comple portable set. I’m missing the whip antenna used for man-portable use, but I can still use the set at a fixed location with standard AB-22/23/24 whip elements which screw into the mount on the rear of the transceiver. I’m also missing the rare FT-505 pack frame mount. I was able to borrow one of the few known ones for a while to photograph it, and I created a solid model of it in case I ever find the gumption to have replicas manufactured.

An overview of the kit that I bought. Not shown here are an AB-15 mast base and a set of whip elements which also came with the set.

The exterior of the BC-1335. The last picture shows the antenna mount on the rear of the set, with the top cover removed. 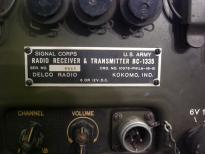 Inside the top of the BC-1335. The unit includes a magic eye tube and test probe which can be used to realign the set without test equipment after changing crystals. Running spares for many components are also stowed inside. I think that the magic eye tube circuit uses a bias reference cell, which is probably quite dead in my set. Once I figure out where it is, I’ll see if I can fashion a suitable replacement. 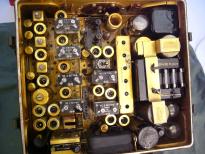 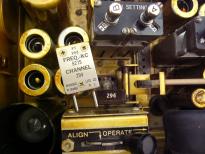 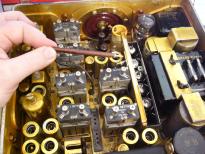 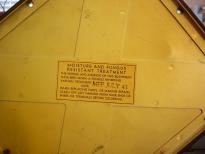 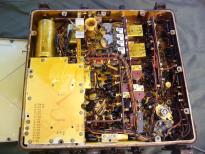 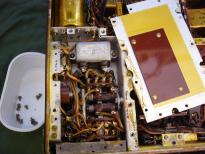 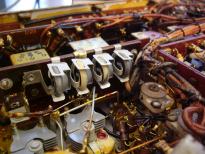 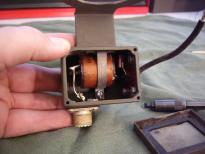 Dynamotor DY-44. I’m not sure how this unit is used with the set yet. I think that it would be connected to 24V power and plugged into the BC-1335’s 6V/12V power input plug, but I’m not sure yet. 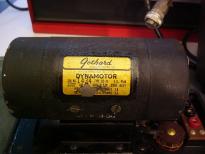 An almost-complete set of crystals for the BC-1335.

The top cover of the BC-1335 includes a complete schematic, basic operating instructions, and a place to store extra crystals.