I bought a T-368C HF transmitter project back in October, 2007 for $1575.42, and finally started seriously working on it a couple months or so ago. This evening, it got its first taste of power in many years! It’s semi-alive, but needs more work:

Here’s a front view of the transmitter, taken back in 2007 when it was stowed in one of my sea containers: 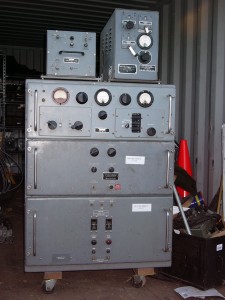 This beautiful beast weighs about 750 pounds, so it’s not easy to move around! The three big drawers come out, but each one is pretty heavy. The bottom one is the heaviest, because it has the big power transformers in it. When I unloaded it from the sea container last August and loaded it into my house, I used my Bobcat to move each of the pieces and lift them up my front steps: 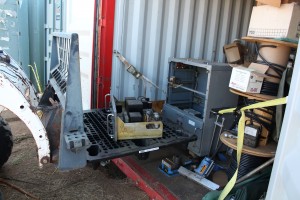 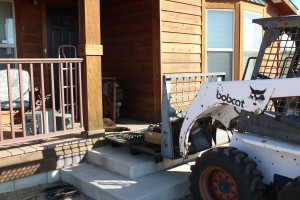 It’ll take more work before I’m running my T-368C on the air, but it’s great to see some good signs of life from it!