I’ve made some good progress on my T-368C transmitter already. The arcing problems have subsided on their own, though they may come back later. I traced down the modulator problem to a single resistor in the speech amplifier which failed open, thus removing power to the clipper tube’s plates and breaking the audio path. The transmitter is now working on CW and AM at full power into a dummy load! I also replaced another resistor in the same speech amplifier circuit, but I think it was actually OK and I just had a measurement error due to residual charge in the circuit.

There are still some kinks to work out…

The modulator bias potentiometer looks bad when I measure it with a DMM, and I can’t seem to get quite enough bias on the modulator tubes for them to allow 100% modulation. I found what looks like a suitable replacement on eBay, and it’s on the way.

Two of the three panel meters are sticky, too. I need to rap on their glass to get them to respond to small changes. These are sealed, ruggedized meters, and I don’t know yet whether it’ll be practical for me to try to repair them. I’ll keep my eyes open for suitable replacements, but I’d prefer to rejuvenate the original meters if I can. 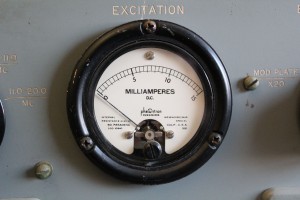 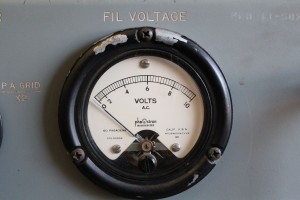 Here’s the transmitter operating at full power AM. It’s tuned up to produce a 500W carrier, but it’s only making 700W PEP (Peak Envelope Power) since I can’t get 100% modulation due to the bad potentiometer (the math says that I should see 2000W PEP with a sinusoidal modulating signal at 100% modulation and 500W carrier power). 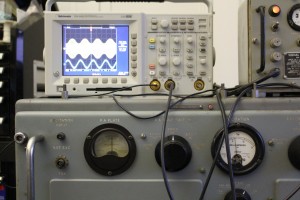 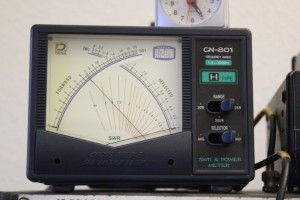 The FCC-mandated legal limit for amateur radio use on the bands where this transmitter operates is 1500W PEP. This suggests that I’ll need to dial the transmitter power back to 375W of carrier power to stay in legal limits. However, I may not need to dial the power back that far because the human voice has a complex and asymmetrical waveform, so the simple rule of “AM PEP = 4x carrier power” probably won’t apply. I’ll need to do some experimenting to see how I need to tune up my transmitter to stay under the legal power limit.