My T-368C transmitter uses three impressively large transmitting tubes. The power amplifier (PA) uses an Eimac 4-400A, while the modulator uses a pair of Eimac 4-125A tubes. These big tubes are beautiful in my opinion, especially when they’re operating with the plates glowing red. Sadly, they’re not normally visible in operation due to the transmitter’s opaque steel cabinet, studded with interlocks to keep folks away from the lethal high voltage that lurks inside. Even with the interlocks bypassed for debugging purposes (which is dangerous, and should be avoided when possible!), the big 4-400A tube is further obscured by an opaque metal chimney which ducts cooling air around it.

So, here are the tree tubes sitting on my workbench, at a nice, boring room temperature: 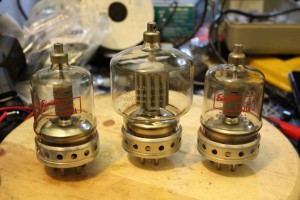 At this point, I have my T-368C working with the exception of low amplitude modulation depth. I replaced the large 50 watt modulator bias potentiometer on the front panel with a new one because the old one’s moving contact was badly worn, and not pressing against the resistance element tightly enough. This didn’t fix the modulation depth problem as I had hoped. More debugging shows that the audio appears to make it all the way to the modulator tube grids with ample amplitude, and the two 4-125A tubes are looking like the most likely culprits.

Dennis W7QHO suggested that I look for scorch marks on the metal skirts inside the tubes underneath the plate structures. I hadn’t noticed them before, but now they’re plain as day under the right lighting: 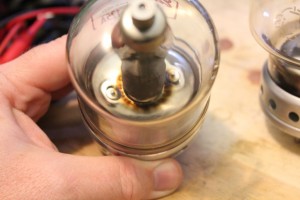 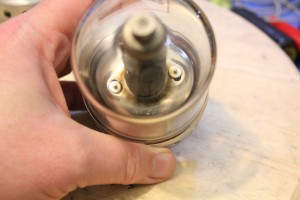 So the bad news is that I’ll need to spend the bucks on a new pair of these tubes… about $135 each from a commercial tube vendor that I use. Several are available for less on eBay at the moment, so I may shop there instead. The good news is that I have great hope that my transmitter will modulate properly once I swap those tubes out, which is a simple operation!