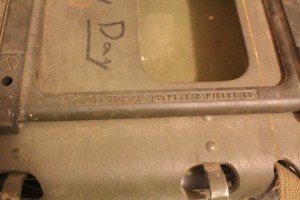 I don’t know what radio set(s) this mount goes with yet, or whether it’s from the WW2 era or later. It is constructed differently than the FT-505 that I borrowed and wrote about; that FT-505 was assembled from rails of cast (or possibly forged) aluminum riveted onto a stamped sheet aluminum base, while this MT-702/U is a single cast piece. I’ve heard from another FT-505 owner who says his mount is a single casting, though. “MT-702/U HUBBELL & MILLER CO” is cast into the base portion of the mount.

If you know what radio set(s) this MT-702/U goes with, please comment below.

Your pack board is equipped with the later style Korean War vintage mount for use with a BC-1335 & it’s companion dry battery box. It had the same foot print as the BC-1335.

My BC-1335 is in the WW2 configuration, without the additional dry cell connector, and my CH-191 box (retrofitted with six 6V gel cells in parallel) provides enough battery capacity for my use of the set. So, I’d much rather have an FT-505 mount for my SCR-619 set. Anybody wanna trade? ;)