For a long time, I’ve had a passing interest in radar antennas. Not so much the antennas themselves, but mostly their azimuth-elevation (az-el) drives. Every now and then, I’d search on eBay for any such az-el drives that looked both interesting and inexpensive, with or without antennas. I finally found one to buy about a month ago, and here’s a little bit about it. 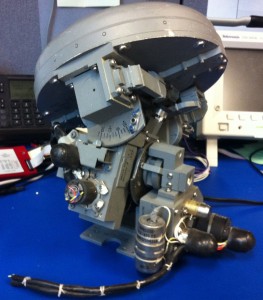 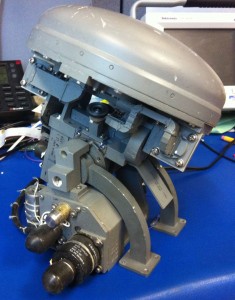 The eBay listing informed me that this antenna was originally part of a terrain-following radar system on the F-111 “Aardvark” aircraft. Some Googling informed me that it most likely belonged to the AN/APQ-171 system, which used two of these antennas mounted side by side in the nose of the aircraft, underneath the larger antenna of the AN/APQ-169 attack radar. Google showed me various pages with pictures of the antennas in the nose of an F-111, and the AN/APQ-171 system by itself in a promotional photo.

Jane’s describes the AN/APQ-171 this way:

The AN/APQ-171 is a dual-channel forward-looking multimode radar developed for the F-111. The radar’s primary function is to provide proper commands to control the F-111 automatically at a preselected set clearance height above the terrain.

Various other sources indicated that the system was developed by Texas Instruments, and was part of an upgrade applied to extend the useful life of the aging F-111 fleet both in the US and abroad. Australia was the last user of the F-111, finally retiring them in December of 2010.

The antenna that I received was mostly in good condition, but the azimuth drive had a sheared roll pin where one of its gears was attached to its shaft. I think it’ll be repairable, but this was one of the reasons that I went back to eBay and bought another one! It turned out that the seller had two more antennas left, which he listed at the same time. Another buyer and I each bid on one of them, and got them for the opening bid prices. The second antenna has both drives intact, but has some damage to the fiberglass radome. 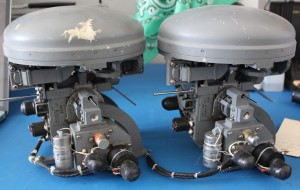 The elevation drive can traverse from about 35° below horizontal to about 15° above horizontal. The azimuth drive traverses about ±45° from straight ahead. Each axis can be locked at 0° by inserting a 1/8″ diameter pin, and I’ve locked both axes with pieces of drill rod in some of the pictures. The locking holes appear to be lined with tool steel bushings, leading me to believe that these holes are meant to be used with precision-ground tooling pins for alignment purposes rather than simple “remove before flight” locks. 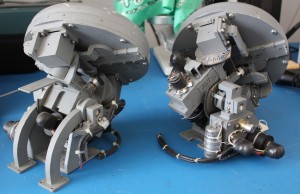 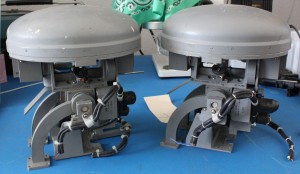 The antenna itself is a “flat plate antenna”, consisting of a number of slotted waveguide antennas arranged side by side in order to form the desired beam. It is covered by a fiberglass radome which includes both dielectric and conductive structures which I assume play some role in beam-forming. 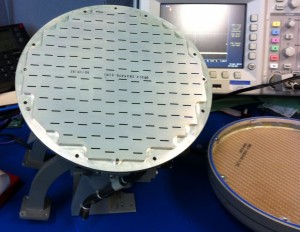 The antenna array is fed by two waveguides which are terminated with WR62 flanges, suggesting that the antenna is tuned somewhere in the 11.9 to 18.0 GHz range.  The waveguide flanges lie in the same plane as the az-el drive’s mounting plate, and the waveguides are routed to the antenna through four rotary joints and many bends. 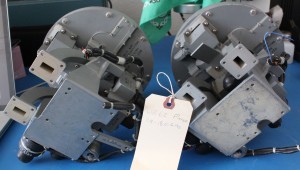 One of these days, I’d like to figure out how to run the drives from a microcontroller. I don’t expect to use them as functioning radar antennas, but I’d like to make a display with moving parts. If the antennas were usable on a ham radio band then I could come up with an excuse to use them somehow, but they appear to be designed for operation around 15 GHz, not overlapping any nearby microwave ham radio bands. Until then, they look nice sitting around and gathering dust.