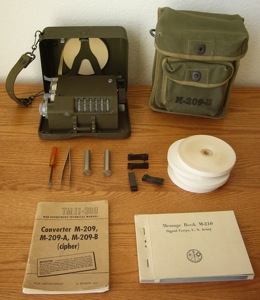 Converter M-209-B is a compact, portable mechanical cipher machine which was used by United States military forces during World War 2 and the Korean War. Designed by noted Swedish cryptographer Boris Hagelin, about 140,000 of the M-209 series machines were built. Unlike the German Enigma machine, this machine does not require an electrical power source. The U.S. Navy referred to this machine as the CSP-1500.

My original 1944 manual describes the machine as follows:

Converter M-209-(*) is a cryptographic device issued by the Signal Corps for use in divisions and lower units, down to and including battalions. It may also be used by units larger than division, or by any other organization authorized by the Chief Signal Officer. The converter provides a secure and rapid method of cryptographing tactical messages, and may be operated by personnel not extensively trained in cryptography.

Converter M-209-(*) is a small, compact, hand-operated tape-printing, mechanical device designed for rapid enciphering and deciphering of tactical messages. When properly set and operated, it will encipher a plain text message of any length, automatically printing the enciphered text on a paper tape in 5-letter groups; or it will decipher a message that has been previously cryptographed by another Converter M-209-(*), printing the clear text on a paper tape with proper spacing between words.

According to its dataplate, my machine was made by Smith Corona, with a 1944 contract date. It appears to have been very lightly used, and I question whether it was even used before being released as surplus. I’m certainly not complaining… my M-209-B is in beautiful condition, with very little visible wear, and it is fully operational. The canvas bag that came with it is also in nearly-new condition. It came with five spare rolls of paper, an original manual, and four metal “message clips” I don’t know how the clips are supposed to be used, but I’d guess that they allow a piece of paper (such as a form from the Message Book M-210 to be clipped to the outer lid to keep it from blowing away. My kit was missing the screwdriver, tweezers and long shoulder strap, but I’ve obtained the screwdriver and tweezers since then.

If you are interested in playing with the M-209 cipher but don’t have access to a real machine, there are still options. Dirk Rijmenants has written a wonderful graphical M-209 simulator for Windows. Frederic Andre has written a web-based simulator which shows details of each ciphering step. I have also written my own command-line M-209 simulator which can be compiled on Unix-like systems, Macs and Windows systems (with the appropriate tools, but those tools are generally free). 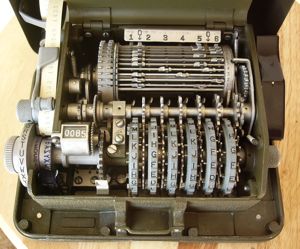 The M-209-B, like many other designs by Boris Hagelin, are collectively referred to as “pin and lug” machines. The M-209-B is essentially a mechanical pseudorandom number generator (PRNG) which spits out numbers between 0 and 27 (inclusive), and subtracts each number in sequence from an entered plaintext character to generate a ciphertext character via transposition. Enciphering and deciphering use the exact same procedure.

The six wheels visible through the inner cover have 26, 25, 23, 21, 19 and 17 pins, respectively, each of which may be clicked into either the left (ineffective) or right (effective) position.

The operator dials in the letter to be enciphered with the knob on the left, then turns the operating handle on the right through one half rotation. This rotates the drum with the lug bars. As each bar passes by the wheels and their related mechanisms, if either or both of its lugs encounter effective pins on the wheels, then the bar will be kicked over to the left. The bars that get kicked over to the left function as a variable number of gear teeth, and each one of them rotates the letter knob by one position. Thus, the knob will be rotated 0-27 positions to get the ciphertext letter corresponding to the plaintext letter that was entered.

Each time the operating knob is turned, each of the six wheels gets advanced by one position. Since they have relatively prime numbers of pins, it takes a large number of cycles (a bit over 100 million) until their pattern repeats. Well, this is large in human terms, but not so large in cryptographic terms. Later machines using the same principle had more pins per wheel and much longer PRNG sequences.

The pin and lug combination determines the pseudorandom number sequence, and is generally changed daily according to a prearranged schedule.

The initial wheel settings form the seed of the PRNG, and must be different for each message. There are various protocols for selecting them and communicating their setting to the message recipient. They are generally included with the enciphered message in some way, and they are generally enciphered to make life harder for any enemy cryptanalysts who may try to decipher the messages.

The alphabet marked on the knob and the alphabet on the printwheel are reciprocals (i.e., one follows the sequence A, B, … Z and the other follows the sequence Z, Y, … A). Thus, enciphering and deciphering are done exactly the same, rather than requiring different mirror-image operations for enciphering vs. deciphering. The machine does have separate cipher/decipher modes, though. In cipher mode, the unit automatically spaces out 5-letter groups in the printed ciphertext. The operator enters ‘Z’ in place of each space. In decipher mode, the 5-letter spacing is not performed, but deciphered ‘Z’ letters are printed as spaces. Any ‘Z’ character in the plaintext must be inferred from context. Numbers are spelled out. Single letters are spelled out phonetically. Aside from the different spacing methods, enciphering and deciphering work exactly the same way.

If the operator runs out of paper tape or ink, the enciphered/deciphered letter can also be read off from a separate letter ring on the knob.

Pictures and a Movie

Here are lots of pictures of my M-209-B. Click on the thumbnail pictures to see (much!) larger versions.

Now, here is the converter outside of its canvas bag. The dataplate on the top of the outer lid includes the model number serial number, manufacturer’s code (CACH = L. C. Smith-Corona Typewriters), and contract number.

Here is the converter with the outer cover opened, from four different angles.

Now I’ve opened the inner lid to expose the converter’s mechanism. Notice that there is a spring clip on the outer cover which holds the inner lid in the raised position. It’s difficult enough to set the pins and lugs without needing another hand to hold the lid open! 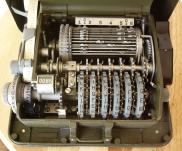 Since I took the previous pictures, another collector sent me the screwdriver and tweezers that were missing from my set. Both of them stow inside the lid. The screwdriver is generally used for setting the pins and lugs, not for turning screws. Note the notch in the end of the screwdriver, which makes it easier to set the lugs. The tweezers are fairly heavy-duty, and are mainly used for changing the ink roller (which can be a messy job!). Neither the tweezers nor the screwdriver have any markings. At this time, I’m still missing the long shoulder strap for the canvas case. 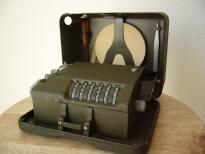 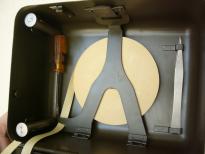 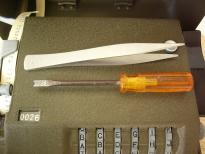 Figures from the Technical Manual

Here are several figures from my March, 1944 version of TM 11-380, the War Department Technical Manual for the M-209 series. As with the pictures above, you can click on the thumbnail pictures to see large versions. 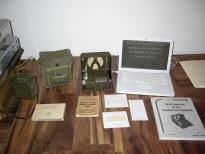 I displayed my M-209-B and delivered a presentation on it at the 2009 West Coast Military Radio Collector’s Group (MRCG) meeting in San Luis Obispo, CA at the beginning of May, 2009. My display included a looping video playing on a laptop computer which described the M-209-B, its history and how to operate it. My presentation went into more detail about the M-209-B’s internal operation, and it included both static slides and video clips. I ended my presentation with a hands-on demonstration in which audience members had an opportunity to decipher a message with my M-209-B. Click on the thumbnail picture to the right of this text to see a larger view of my M-209-B display.

Here is a PDF version of my presentation slides. Unfortunately, it doesn’t include the video clips from my presentation; they just turn into still pictures when I export to PDF.