The delivery trouble that I had last Friday turned out to be a temporary little speed bump, and I got my new M923 5-ton 6×6 truck today! All is squared away with the towing company, and I’m likely to use their services again.

The tow truck driver (he’s the manager of the company, as well) was able to start and drive the truck in the GL (Government Liquidation) yard in Barstow, and this was quite fortunate because he says that the trucks were all packed in there like sardines. If he wasn’t able to drive it, then he would have spent hours dragging it into position where he could load it onto his Landoll tilt-bed trailer. The power steering came in handy then, too!

When he arrived at the end of the pavement about a quarter mile from my home, he correctly realized that it’d be silly to drag his low-bed over-the-road rig over my local rough dirt roads when his load is a well-running off-road tactical truck. So, he offloaded at a convenient clearing, called me up for the go-ahead, and drove the truck the rest of the way to my property. It was delightful to see that giant beast driving up the road to my property!

All of my best hopes for this truck came true, and I won the substantial gamble that I took by bidding without an in-person inspection. The truck does appear to have come out of a 2009 rebuild without being reissued or cannibalized. There’s a sealed crate on the passenger seat that I suspect contains the Basic Issue Items (BII) for the truck, which would include stuff like a jack, lug wrench, basic tools, and so forth. I won’t know for sure until I have a chance to dig into the crate, probably this weekend.

The only operational issues I’ve noted so far are the the driver noted that the accelerator pedal sticks, and I heard an air leak from under the dash after he turned off the engine. There are some spots such as the driver’s side steps where the re-paint has peeled off with surface rust underneath, but they’re minor. It’s reasonable to expect some issues in a truck that’s been sitting unused for a few years, so I can’t complain at all! I expect to do work on the truck anyway; for example, the military uses 10-weight engine oil in the transmission to limit the number of fluids they need to stock, but I’ll want to flush that out with Dexron-III transmission fluid.

I plan to post in more detail about this truck when I have a chance. Maybe this weekend? In the mean time, here are a few photos that I took this evening after I got the truck. Feel free to click them to see them in their ginormous high-res glory! 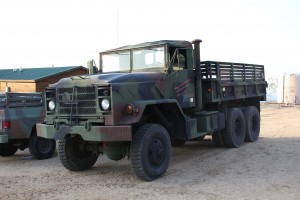 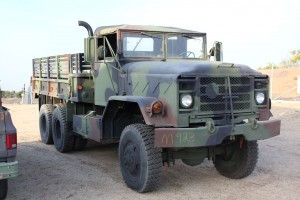 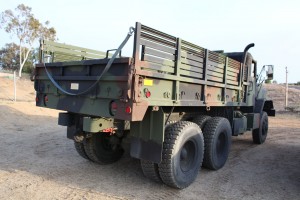 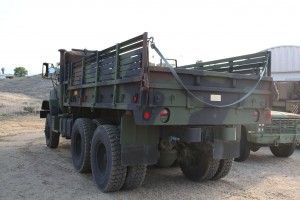 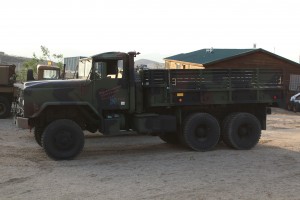 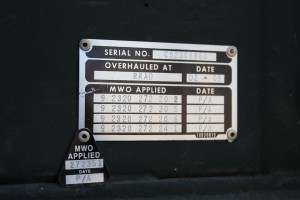 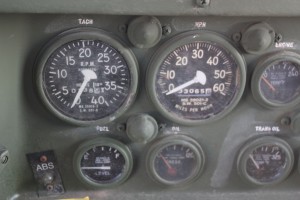 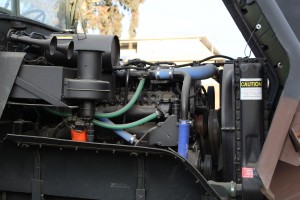 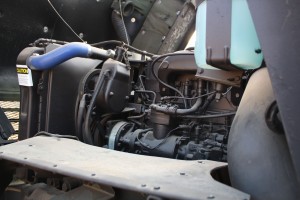 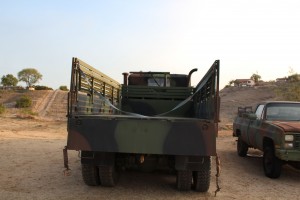