On June 15, I saw this cryptic tweet from Elecia White. Being out of the loop, I asked what the new toy was, and was directed to Brian Benchoff’s review on Hackaday of the new Monoprice Select Mini 3D Printer. It’s an exciting new 3D printer with a very attractive price point, and I had to have one! Read on for my not-so-smooth initial experience…

There’s been a lot of excitement over this new little low-cost, “turn-key” printer. It was out of stock already by the time I learned of it, so I signed up to be notified when new stock arrived. I finally got my notification on June 29, and immediately pounced on two of them: one for me, and one for my dad. This would be my first 3D printer, and I anxiously awaited for it to arrive. I got the order on Friday, July 1, and opened up the box that I arbitrarily chose as “mine” right away! 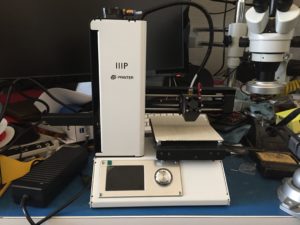 Well, the initial out-of-box experience was a bit of a let-down. When I plugged the brick-on-a-leash desktop power supply into the AC line, I was immediately presented with two muffled pops from inside its case. No power out, but at least the case held the smell of emitted magic smoke inside. 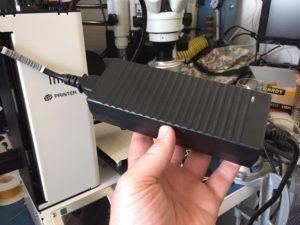 Well, the printer was already back out of stock, discussion on the Facebook group for MP Select Mini owners led me to expect that any RMA would leave me waiting for new stock to arrive before Monoprice could ship me a replacement, and I was facing a long holiday weekend. Well, screw that! At $200 dollars (which would have been $169 if I had waited a day and entered a Monoprice coupon code!), I was prepared to ignore and/or void my warranty and go it alone. The desktop power supply is rated to provide 12VDC at 10A, and that’s easy to find in my lab full of ham radio gear. Unfortunately, the DC input barrel jack isn’t a size for which I already had a plug laying around, so an immediate fix would involve cutting off the blown power supply’s output cord so I could use it with a ham radio bench supply. I just needed to determine whether the main printer unit was DOA (which would probably lead me to RMA it) before doing anything that would void the warranty. 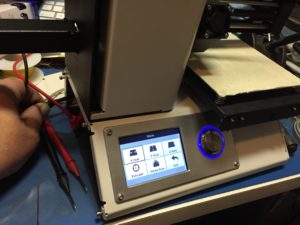 A quick experiment with power supplied by a lab bench supply showed that the main printer unit was alive, so I decided to go ahead and void the warranty. Opening up the power supply revealed that the main regulator IC had blown, along with several surrounding components. I harvested its power output cord, then proceeded to hook the printer up to a big benchtop power supply intended for ham radio use. 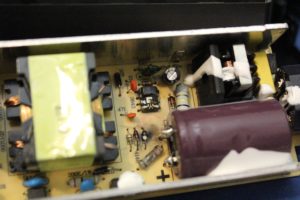 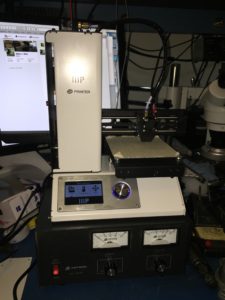 Printer on Top of Bench Supply

With the unit properly powered, I could finally begin playing with it! The bed was badly out of adjustment, but it wasn’t hard to dial in. I printed out one of the sample files that came with the printer, and it turned out nicely! 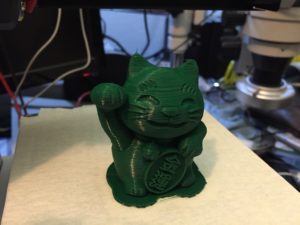 On Saturday, I brought the other printer over to my folks’ house. This one worked out of the box, just needing the bed height to be readjusted before successfully printing out the other sample file that came with the printer. 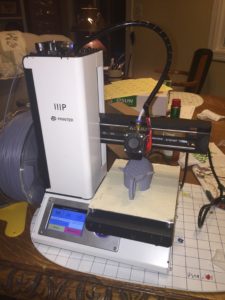 I continued experimenting with my printer on Sunday, as I learned how to vary slicer settings to get good results. All went well for a while, until an unpleasant message appeared on the display: 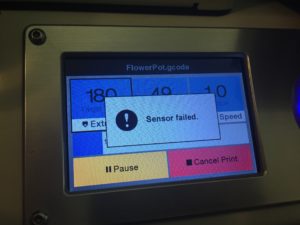 Based on comments from other owners of this printer, I knew that meant that the controller was no longer getting readings from the temperature sensor in the extruder head. Dismounting and examining the sensor revealed that one of its fragile leads had broken, at a spot inside the extruder head where a soldered repair would probably fail pretty quickly due to heat from the extruder. 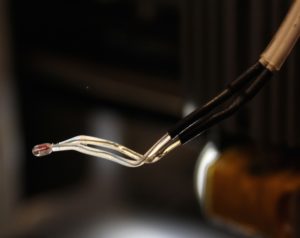 So at this point, my printer is down until I replace that thermistor. A quick measurement shoed that its resistance at room temperature is around 100k ohms, and I’ve ordered a promising-looking replacement from Mouser already in hope that it’ll be suitable. I plan to characterize the original sensor’s behavior over temperature to better identify replacement candidates, which I think will be very helpful for the small but growing MP Select Mini owner community. Several other owners have reported very similar sensor failures, so identifying good drop-in sensor replacement components will help many people fix their printers. When I install whatever replacement I identify, I’ll change the wire routing to reduce stress on the sensor leads as the extruder head moves.

Some folks have reported annoying rattles related to the Z axis guide rods, which they have fixed with hot melt glue or 3D-printed brackets. My printer doesn’t seem to rattle there so far, but it does have an annoying sheet-metal rattle in the gantry. I’ve applied some silicone sealant to stop that rattle; the silicone is still curing, so I haven’t tested the fix yet. 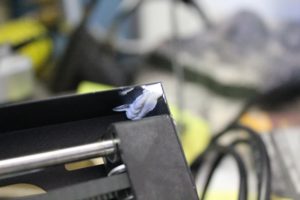 Folks have also reported that the stepper motor drivers on the main controller card run hot, causing printing problems for some people as the drivers overheat. The drivers have a heat sink, but there’s not enough air circulation inside the case to keep it cool. Adding a cooling fan has cured that problem for several owners, so this is an upgrade that I plan to perform soon.

I don’t regret buying this printer, and I’m definitely having fun with it. But it’s not really ready for prime-time yet, in my opinion. There appear to be significant quality-control issues marring an otherwise nicely-made printer, and I hope that Monoprice will be able to resolve these issues with the overseas manufacturer soon. Owners who are used to tinkering with experimental and/or home-made printers don’t seem to be too perturbed by these issues, but since this printer is being marketed to new users as a turn-key system, these issues really need to be resolved. I purchased the unit expecting to experiment with it and hack in upgrades from the outset, so I’m not nearly as annoyed by the issues I’ve experienced as I might have otherwise been.

Power Supply with Lid Off

Printer on Top of Bench Supply

Back Side of Cat