I’ve measured the resistance vs. temperature of the thermistor in my MP Select Mini 3D printer. It looks like the thermistors that I speculatively ordered don’t have the exact same temperature curve, but they may be close enough to use my printer with a manual adjustment of the temperature set points to compensate for sensor error. 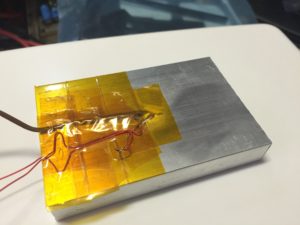 With everything set up, I recorded the thermistor resistance at 5 degree C increments from room temperature to 250 degrees C. 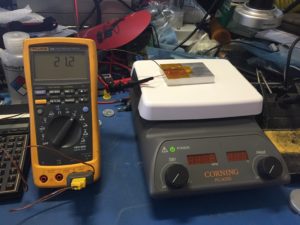 Then, I plotted the data in GNU Octave, along with the expected response of a thermistor that I speculatively ordered from Mouser. 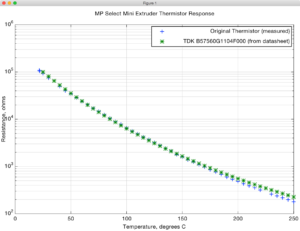 After I did this, I saw a post on the Facebook group with information about the original thermistor:

Extruder and hotbed are all 100K NTC resistor with beta 3950.

If I understand the datasheet of the thermistor that I ordered, its beta value is 4092 vs. the 3950 of the original thermistor. Based on the curves I plotted, I think it will at least be close enough to close the extruder temperature control loop, though it may result in temperature errors. But I’m hoping that I will be able to compensate for that error by calibrating out the actual temperature vs. requested set point in the range of printing temperatures I’ll use, so I can then fudge the set point to get the temperature that I actually want.

Unfortunately, I haven’t found any better thermistor replacements yet at the component vendors I usually use. Once I have more to report, I’ll make another blog post with details.